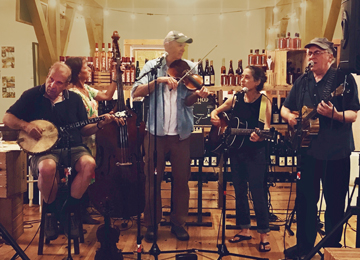 New Cut Road String Band is an old-time string band that plays music from the southern Appalachian Mountains that became popular in this country from the mid-1920s through to the Great Depression. With John Hoffmann on fiddle, Steve Arkin on banjo, Jim Reidy on tenor guitar, Randi Beckmann on guitar, and Sally Freund on bass, they deliver fast and furious fiddle dance tunes as well as ballads that bring a tear to the eye.

John Hoffmann, the fiddler, played banjo for The Tompkins County Horseflies in the early 1980’s before he segued to fiddling. John has garnered a number of awards for his fiddle playing around the country.

Steve Arkin grew up in New York’s legendary Washington Square music scene, playing both old-time and bluegrass music in many bands. Bill Monroe said of him, “it takes backing to get that stuff going. Steve could play the best backup banjo I ever heard.”. Steve has won numerous banjo contests and has taught both bluegrass and old-time banjo.

Sally Freund, the bass player, has become a trusted rhythm player on bass, guitar, triangle and scrub-board, backing up many of the great Old Time and Cajun/Zydeco musicians around western New York and beyond.