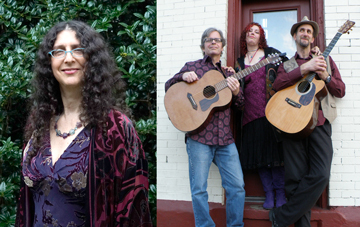 “While Mara Levine doesn’t sing original songs, it truly doesn’t matter. She chooses songs or has songwriters create to suit her voice, and what a voice! With Gathering Time backing her up, it’s magical. Mara and Gathering Time performed at my series a few days ago and the audience loved it, and her. And the harmonies they created – spectacular.”—Jill Padua, RiverFolk Concerts

Called one of the best singers of her generation by Christine Lavin, folksinger and jewelry designer Mara Levine has been creating beautiful interpretations of fine traditional and contemporary folk songs for many years and singing professionally as a member of various ensembles. Folk DJ Jim Marino has referred to her as “golden-voiced,” while Michael Stock calls her voice “full, rich and soothing.”

Mara shares shows on a regular basis with the Long Island, NY-based folk trio Gathering Time, with whom she has toured nationally as well as internationally in Canada, Ireland, and Germany.. Founded in 2006, Gathering Time’s members Stuart Markus, Hillary Foxsong, and Gerry McKeveny have strong roots in traditional folk as well as ’60s and ’70s folk-rock, and they’ve been known to interpret some of those classics alongside their original songs at their shows.

Bob McKillop of MaineFolkMusic.com writes, “Gathering Time … has perfected two separate but related art forms: three part harmony and having a ball on stage! When they harmonize, some sort of fundamental, cosmic concordance occurs that makes you very happy that you have ears.”