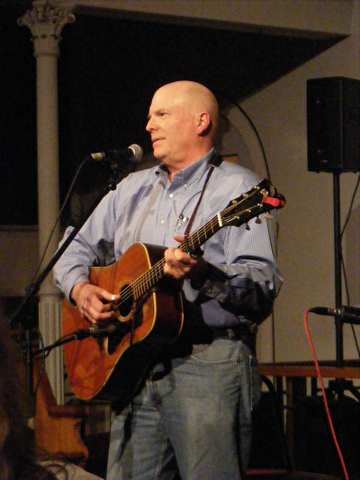 “He’s a musician! He’s a pilot! He’s a Renaissance Man! … I HATE him!” —Christine Lavin

A veteran of New England, Greenwich Village, and California songwriting communities, Hugh O’Doherty ‘s live performances take the audience from romance to satire, and from riveting emotional issues to downright self-deprecating silliness. He lives in, and sings about, the real world. Hugh puts the frameworks of human connections into perspective with songs of: love, humor, childhood, friendship, marriage, blended families, justice, environmental issues, and other contemporary topics.

Hugh was raised in a family in which music was as essential as oxygen. Listening to it, dancing to it, playing it. In Hugh’s case, that meant singing, and playing piano and banjo (and guitar, when his brother, Liam Tomas O’Doherty, wasn’t looking). In high school, he sang in acoustic groups with Liam and other friends. Like Liam, Hugh started writing his own songs, and acting in the school plays. Hugh continued acting in college, while playing many of the campus coffeehouses in the Middle Atlantic States. He then carved a career, flying rescue aircraft, from hangars along American and Canadian shorelines. Meanwhile, Hugh conducted the parallel artistic pursuit of playing for the acoustic audiences of many of those regions, and engaging in California, New England, and Greenwich Village songwriting communities.