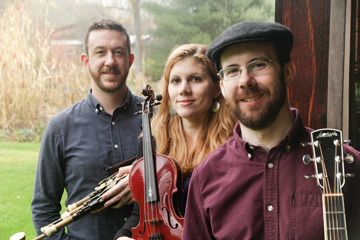 Arise & Go is an exciting Celtic trio that finds its roots in the dance music of Ireland, Scotland and Atlantic Canada. Noted for their “precision and energy”, the band blends traditional melodies and instruments into fresh new arrangements. Based in Ithaca, New York, Ellie Goud, Michael Roddy, and Tim Ball bring their varied musical backgrounds together to produce a sound which is both grounded in tradition and uniquely fresh and driving.

Winners of the 2018 Best of Bound for Glory Award, Arise & Go has been featured in Irish Music Magazine, Roots Music Canada, and the Irish American News and praised for their “musical complexity and colour” that is also “authentically mindful of tradition.” 2019 sees the release of their full-length album “Meeting Place”.

Piper Michael Roddy has spent over 20 years creating his unique combination of Scottish and Irish piping styles. Michael is an active teacher and has also premiered several of his own compositions and arrangements for pipes and orchestra.

Tim Ball (guitar, bouzouki, foot percussion) has been a staple of the contra dance and Irish music scenes in western New York for the better part of a decade. An exceptionally versatile musician and relentless collaborator, he performs throughout the Northeast with contra dance bands Tempest and Center Street, and Ithaca’s Irish session band Traonach.