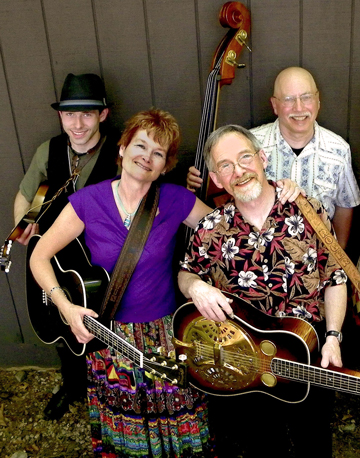 The powerhouse duo of Amy Gallatin and renowned resophonic guitarist Roger Williams joined forces a few years ago to explore their mutual love of country standards, served up with an acoustic treatment in the bluegrass vein. The result is a toe-tapping blend of heartfelt vocals, soaring harmonies and red-hot picking, traditional yet modern and distinct.

The two are enhanced by mandolin and vocals from Roger’s son, JD, and by veteran bassist Eric Levenson. Amy Gallatin and Stillwaters have taken the stage at some of the most prestigious venues in the U.S., Mexico, and Europe.

Amy Gallatin, born in Muscle Shoals, Alabama, lived in several states before settling in the West, where she was raised. Amy is at home singing various musical styles — country, folk, bluegrass or western swing–branding each song with soulful sincerity.

Roger Williams started playing the resophonic, Dobro style guitar in 1963, when he was just a young teenager. He has gone on to perform and/or record with many well respected Bluegrass and folk acts on the national and international circuit. Bluegrass Unlimited magazine said “Williams, like all great acoustic slide players, can be mellow and lingering or crisp and jaunty. He’s also a very fine singer (with) more than a little of Merle Haggard in voice and emotion.”